Long before the term “white flight” entered the language, white Bostonians spent an inordinate amount of time fleeing one another. Saint Joseph’s survival bears witness to two tumultuous periods in the city’s history. Built for Congregationalists in 1834 by Alexander Parris, Boston’s leading architect after Charles Bullfinch departed for Washington to complete the U.S. Capitol, the church briefly attracted its intended constituency. By 1862, however, the West End was largely Irish Catholic, prompting a sale to the archdiocese. Successive waves of immigration brought Eastern European Jews, Armenians, Greeks, and Syrians to Boston’s most diverse melting pot. Government authorities in search of a higher tax base declared the solid working-class quarter a slum in 1953, leveling forty-six acres and displacing 2,700 families, few of whom could afford to return to unsightly new high-rises. Happily untouchable as a church, Saint Joseph’s regained its vibrancy to stand as a lonely reminder of a vanished neighborhood.

The 1883 Hook & Hastings is an excellent example of how that company matured into a manufacturing powerhouse while retaining remarkable quality. If the stoplist for Opus 1168 is not exactly typical of two-manuals, with such big-organ luxuries as a Great sixteen foot and three Swell four-foot stops, the tight choruses, polished delicacy, and excellent reeds are. They bear witness to Hook & Hastings’ enviable quality and consistency in this period. 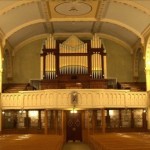