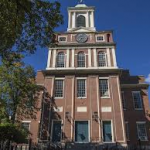 Occupying higher ground than Old North Church, the original church of 1737 was razed by British troops fearful its spire would also be used to send signals across the river. Not until 1806 did Benjamin Asher complete the present Federal-style building. Together with the eighteenth-century Otis House next door, Old West is a rare survivor of the West End neighborhood that vanished during Boston’s 1960s brush with urban renewal. The proportions of the front tower are especially harmonious, shallow pilasters leading the eye upward to two floors of windows surmounted by clock, swag, and cupola. Congregationalist at its founding, converted into a public library at the end of the nineteenth century, Old West has housed a Methodist congregation since 1964.

The 1971 Fisk organ finds that builder at his most intense and concentrated. Rarely has such a wide musical reach been distilled into a mere twenty-nine stops: choruses on all departments, tierce stops on each manual, reeds for early French repertoire alongside an embryonic Romantic Swell, all from a compact, detached keydesk. Cunning treatment of the voices allows them to be coaxed this way for German music, that way for French. Old West has taught a generation of organists about sensitive key action and elegantly flexible wind. The early nineteenth-century upper case is recycled from an Appleton organ, widened from three to four towers in homage to Father Smith; the chair case was built new to match. 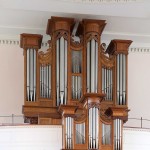