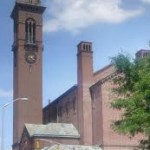 The steady influx of Catholics into Protestant Cambridge led to the retrofitting of a disused Congregational church by 1873, followed by the present building of 1915–1923 to plans of Edward Graham, heavily indebted to Verona’s Romanesque masterpiece, San Zeno Maggiore. A bell in the elegantly slender campanile bears a wistful inscription from Isaiah: “Vox clamantis in deserto”—a Catholic voice crying out in the hard Protestant wilderness that is Harvard Square. Since 1963, Saint Paul’s has been home to a boy-choir school whose ensembles sing daily offices in a sumptuous acoustic—one which, alas, has never been graced with a purpose-built, entirely new organ. Jesse Woodbury’s Opus 251 of 1904 was enlarged, electrified, and installed in the gallery in 1924 by local organ builder Paul Mias. Casavant supplied a new console in 1947, then, in 1959, a two-manual unenclosed section in the south transept. Among the area’s first Casavants from tonal director Lawrence Phelps, it mirrored the aspirations of the day right down to a bee-in-a-bedpan sixteen-foot Krummhorn (since removed). More recent work falls under the banner of renovation: tonal changes in the 1970s by Arthur Birchall; a new, Aeolian-Skinner-style console in 1999 by Robert Turner; and a constipation of digital voices, including the entire Chancel Swell. 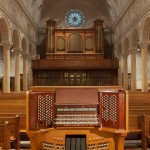