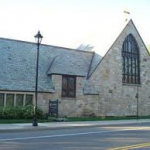 The first Saint Andrew’s was a small chapel built and dedicated in 1894, expanded in 1921 and again in 1931. A parish house arrived in the late 1940s, and in the 1950s the sanctuary was enlarged together with a new education wing. The first organ was a ten-rank Wicks of injudicious unification. When Donald Teeters arrived in 1957, he began a slow campaign for a new organ. Eventually, Donald Willing, one of the era’s prominent writers and thinkers on organ design, was brought in as adviser (at the time, he was organist at Wellesley Congregational Church down the road), and the commission was entrusted to Casavant Frères, under the tonal direction of Lawrence Phelps and supervised by Karl Wilhelm. The new instrument was dedicated in February 1965.

The church’s previous organist, J. Harrison Kelton, is responsible for the new organ, which, when completed in 2006, was Juget-Sinclair’s largest work to date. While some acoustical improvements have been made in the chancel and crossing (really more of a sharp left turn from nave to chapel), the room remains a stubbornly dry ring into which the builders decided to throw a thirty-four-stop raging bull. With its crisp, balanced mechanical key action, the centrally located detached console reaches leftward to the Great and right to the Swell, with Pedal on both sides. While not copying any particular organ, the tonal language here is decidedly French, particularly the bracing reeds, ringing tierce combinations, and roaring Pedal. 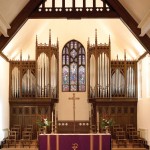