Sound Theology: The Organ at the Time of the Reformation

At the time of the Reformation, Roman Catholic and Protestant churches alike disallowed the use of the pipe organ in services of divine worship; the lecture first reviews the theological reasons for this prohibition. Yet, in less than one hundred years’ time, theological dictum notwithstanding, almost all churches [re-]incorporated the pipe organ in order to rescue exasperated a cappella singers. This paper examines the intriguing history of the pipe organ during this era, tracing its role as a concert instrument used before and after worship, then as a silent backdrop during worship, and finally its reinstatement as a liturgical instrument. 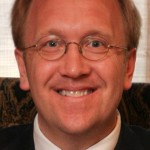 Randall D. Engle, Ph.D., is the senior pastor of the North Hills Christian Reformed Church of Troy, Michigan, and adjunct professor of theology at Oakland University and Detroit Ecumenical Theological Seminary. He is also chaplain for the Detroit chapter of the American Guild of Organists, a trustee of Calvin College, and former president of the national Board of Directors for the Choristers Guild. He received a Bachelor of Arts in music (organ) from Calvin College, and a Master of Divinity from Calvin Theological Seminary. He also received a Master of Arts in Worship from Luther Seminary, and a Doctor of Philosophy from the University of Wales, where his dissertation was on the pipe organ’s evolution from a concert instrument to a liturgical instrument during the Reformation (also the subject of a paper given at this convention).