At the time of his death, more than forty years ago, Marcel Dupré was a paradox. His once-legendary playing technique was gone, hobbled by the ravages of arthritis. His approach to performance, especially that of the music of Bach and Franck, had fallen out of favor. Though several of his compositions remained staples of the repertoire, much of his oeuvre remained un-played and unknown. His recordings, many of them made in the 1950s and 1960s, as his technique was in sharp decline, were regarded as historical curiosities, even embarrassments. This paper presents a reconsideration of Marcel Dupré in light of these developments. 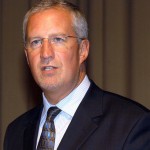 Thomas Chase is provost and vice-president (academic) at the University of Regina (Canada). He holds a Doctor of Philosophy from the University of Glasgow (Scotland). His research centered on theories of hyponymy and their application to the semantic classification of large samples of the English lexis, and is included in The Historical Thesaurus of the Oxford English Dictionary, published in 2009 by Oxford University Press. Holder of the licentiate diploma in organ performance from Trinity College, London, he also works on French organ literature of the nineteenth and twentieth centuries, focusing especially on the music of Marcel Dupré. He has performed and lectured widely, making appearances in Vancouver, Québec City, Philadelphia, New York, Newark, Seattle, and São Paulo, Brazil. In 2004, the Royal Canadian College of Organists awarded him the diploma of Fellow, honoris causa, in recognition of his “outstanding contribution to organ music as performer, scholar, and visionary.”