One of today’s leading concert organists and improvisateurs, Thierry Escaich coaches class participants on the art of organ improvisation in an open-lesson format. 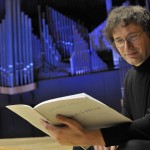 Internationally renowned composer, organist, and improviser Thierry Escaich is a major figure on the contemporary musical scene. Born in 1965, he has been organist at Saint-Étienne-du-Mont in Paris since 1997, having succeeded Maurice Duruflé. He appears in recitals the world over and is known for combining works in the standard organ repertoire with his own compositions and improvisations. Having previously served as composer-in-residence with the Orchestre National de Lille, the Orchestre Symphonique de Bretagne, and the Orchestre National de Lyon, he is currently associate composer with the Paris Chamber Orchestra. His composition catalogue boasts more than one hundred works that have been performed by leading international orchestras and artists, and he has been honored with three Victoires de la Musique awards as Composer of the Year (2003, 2006, 2011). Since 1992, he taught composition and improvisation at the Paris Conservatoire, where, as a student, he earned Premier Prix.