Inspired Service Playing: How to Move From Here to There

We might call this process “traveling music.” It includes such things as processional interludes, music before the children’s sermon, clergy movement in the chancel and preparation for communion. Transitions are often strictly musical, such as bridging between communion hymns or getting to the doxology. This workshop offers beginning to intermediate techniques for bridging gaps in the service, including a basic approach to modulation as well as tips on how to work with hymn motifs. Joyce Kull has done research on service transitions useful in a broad range of worship settings. 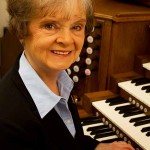 Joyce Shupe Kull, FAGO, Ch.M., DMA (organ performance, University of Colorado), teaches organ at the Metropolitan State University of Denver, as well as privately, and presents lectures and workshops. Her study of J.S. Bach’s Clavierübung, Part III, was awarded the Chancellor’s Dissertation Award in the Arts and Humanities in 1984. She has served as Organist-Choirmaster in churches throughout the United States, notably as Interim Director of Music and Organist at Saint John’s Cathedral, Denver. An active performer, she has been active in the Denver and Boulder Bach Festivals, and has published articles in The American Organist on Bach performance, American Guild of Organists certification, and pedagogical topics. She is a member of the Anglican Association of Musicians. In 2008, she was elected American Guild of Organists National Councillor for Education. She also serves on the Guild’s Executive Committee.