Gregorian Chant Roots in the Music of J.S. Bach

Gregorian Chant was a well-known musical genre to J.S. Bach; he used at least thirty-one plainchant melodies in organ and choral compositions. Bach used chant motifs from two Missals with which he was familiar: Missale Hildensemense and Augustanum  Some stay close to modality, while others modify to tonality. Perhaps the most intriguing is the Gregorian Communio for the Tenth Sunday after Pentecost (in the “old missal”), Acceptabis sacrificium justitiae, which Bach uses in the Passacaglia in C minor. This presentation, with handouts, includes several pertinent examples, both visual and audio. 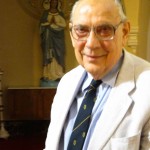 William Tortolano, DSM, is a graduate of Boston University, New England Conservatory, and L’Université de Montréal. An authority on Gregorian chant, he is the author of two books: Beginning Studies in Gregorian Chant (translator) and A Gregorian Chant Handbook, published by G.I.A. He is professor emeritus at St. Michael’s College in Vermont; was a visiting fellow at Cambridge University (Trinity and King’s colleges); held a fellowship in medieval studies at Yale; and was a conducting fellow at Tanglewood.