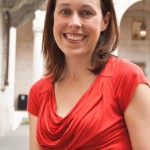 Norah Piehl is executive director of the Back Bay Ringers. She was introduced to handbells in middle school, but took a long hiatus before joining the handbell choir at Trinity Church, Boston in 2001. She joined Back Bay Ringers in the fall of 2005, and quickly assumed a leadership role, publishing the ensemble’s e-newsletter and participating in marketing campaigns. In early 2007, she was named the organization’s executive director, following the departure of co-founding director Peter Coulombe. She has also become a leader in Handbell Musicians of America Area 1, presenting workshops on marketing, branding, and treble bell techniques at directors’ seminars and at the Area 1 Festival/Conference. She currently serves as secretary on the Area 1 Board of Directors and has served as registrar for the Festival/Conference. Her professional background is in the publishing industry. Currently, she is deputy director of the Boston Book Festival.