Organ cases are more than mere clothing for instruments. In addition to creating visual harmony, a good case should mirror the community that commissions it. The skillful case designer must know how to weave together numerous architectural, mechanical, and tonal constraints, conceiving a composition that reflects the client’s aspirations. The ultimate impact of the case depends upon many subtle details. This lecture explores examples of organs from throughout the ages and extracts specific attributes that the case designer uses to visually shape instruments. 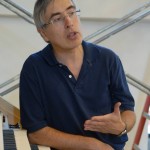 Didier Grassin is an organ builder with Noack Organ Company. His interest in organ building began in the shadow of the famous Clicquot organ of Poitiers, France, his native town. His professional path took him through European workshops, ultimately leading him to head the drawing office at Mander Organs, United Kingdom. From 1996, he spent several years as freelance designer, working for major European and American firms before joining Casavant Frères for eight years as director of the Tracker Department. His designs can be seen in England, France, Japan, China, Canada, and the United States. As a member of professional organizations, he served on the editorial boards of the International Society of Organbuilders (ISO) and the Institute of British Organbuilding. He is currently Vice President of the ISO. He holds a Master of Science in acoustics from Southampton University, United Kingdom, and a Diplôme d’Ingénieur from Université de Compiègne, France.