Edward Thompson’s Prayers of Hildegard for chorus and marimba is in three movements.  1.  There is the Music of Heaven  2.  It is the Heart that Sees and 3.  O Holy Spirit.  “The main musical source for many of Hildegard’s compositions is the Symphonie armonie celestium revelationum.  Hildegard wrote both the words and the music for these pieces and in this respect, they differ from Gregorian chant.  I have chosen, from various sources, three texts that underline Hildegard’s outlook on the oneness of creation.  I chose the marimba because it offers a unique color.  The combination of the marimba with voices means that the voices present the linearity of the music while the percussion provides more of a verticality or rhythmic impetus…..Sometimes the marimba plays a single line that has a lute-like quality.  At other times it plays four-part chords.  Sometimes it functions as a soloist and sometimes as an accompanist.” 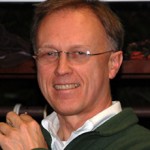 Edward Thompson, D.M.A., has been at the Unitarian Church in Westport, Connecticut since 1978. He holds a master’s degree from The Juilliard School and a doctorate from the University of Hartford. He is a past dean of the Fairfield West chapter of the American Guild of Organists and has concertized throughout the United States and Europe. In addition, he teaches privately, coaches, composes, and accompanies throughout the area. He is an active member of the Unitarian Universalist Musician’s Network.