Scott Perkins’s Benedictus has a glorious, exuberant opening that reflects the joyfulness of this canticle of thanksgiving. In a middle section, swirling melodies intertwine over rich harmonies as Zechariah reveals to his son, John the Baptist, the role John will have in preparing the way for the Lord. An exultant doxology concludes the work.  Benedictus is available through Encore Music Creations. 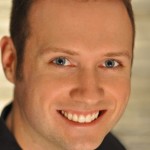 Connecticut native Scott Perkins enjoys a multifaceted career as an international prizewinning composer, a versatile performer, an award-winning scholar, and a music educator. His music includes art songs, opera, musical theatre, solo instrumental works, choral music, electroacoustic media, and music for film and church, and has been performed throughout North America and Europe. His recently composed opera, Charon, commissioned and premiered by the Washington National Opera at the Kennedy Center, has been praised by the Washington Post (“dramatic,” “colorful”) and the Washington Times Community (“perfectly orchestrated,” “haunting,” “a remarkable and welcome musical surprise”).. He is published by Augsburg Fortress.

Since Fall 2012, Scott has been a member of the faculty at DePauw University, where he teaches courses in composition, music theory, and musicianship. He has also taught at Central Connecticut State University, Nazareth College, and the Interlochen Summer Arts Academy.