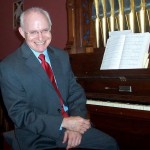 Leo Abbott is a graduate of the Boston Archdiocesan Choir School, Cambridge, and the Chaloff School of Music, Boston. His teachers include Theodore Marier, George Faxon, Clarence Watters, and Flor Peeters in organ; Naji Hakim in improvisation; and Julius Chaloff in piano. He holds the Fellowship and Choirmaster certificates of the American Guild of Organists (AGO), has won first prize in several international and national competitions, and was a finalist at the Grand Prix de Chartres in 1984. In 1986, he was appointed music director and organist of the Cathedral of the Holy Cross, Boston. He has performed throughout the United States and in France, Belgium, and Ireland, and for conventions of the AGO and the Organ Historical Society. He is an active member of the AGO, the Organ Historical Society, and the Conference of Roman Catholic Cathedral Musician. In 2010, he performed at Notre-Dame and Saint-Sulpice, Paris.