Tournemire did not want his recorded improvisations (1930–1931) transcribed, but, long after his teacher’s death, Duruflé did just that, publishing the Cinq Improvisations in 1958. Digital audio technology allows us to listen more closely to “Victimae paschali” than Duruflé ever could, with his record player in an apartment plagued by street noise. This paper focuses on passages in which the transcription differs from Tournemire’s recording, in order to explore Duruflé’s particular contributions to the notated improvisation. In passages in which sound and print diverge, where do modern performers place authority and draw inspiration? 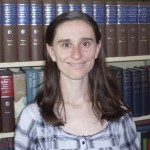 Kirsten Rutschman is a doctoral student in musicology at Duke University, where she is a recipient of the James B. Duke Fellowship. The early stages of her dissertation work involve Swedish music of the early nineteenth century. She also studies organ with Dr. Robert Parkins and performs weekly organ demonstration recitals at Duke Chapel. She holds a master’s degree in language and culture from Linköping University, Sweden, and a bachelor’s degree in German studies from Stanford University.