Few organists are as versatile as organist and pianist as was Thomas Richner (1911–2008). As a winner of the Naumburg Competition in 1940, he embarked on a career as a concert pianist. He taught at Columbia University and Rutgers. The New York Times hailed him as “a born Mozart player.” Largely self-taught as an organist, he was, for twenty-two years, the organist of The First Church of Christ, Scientist (The Mother Church), in Boston, and toured as an organist and pianist under Truckenbrod management. The presentation gives details of Richner’s life and a list of his compositions and recordings. 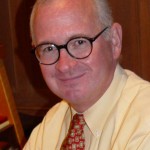 Neal Campbell has been director of music and organist of Saint Luke’s Parish in Darien, Connecticut, since 2006. Prior to that, he held church, college, and synagogue positions in Washington, Philadelphia, New Jersey, New York, and Virginia. He grew up in Washington, D.C. and attended the University of Maryland, studying with William Watkins and Paul Callaway. In 1996, he earned Doctor of Musical Arts at Manhattan School of Music, for which he wrote a dissertation on the life and works of the New York composer-organist Harold Friedell. He is a member of the New York City and Fairfield West chapters of the American Guild of Organists, and is the newsletter editor for the New York City chapter. From 2000 through 2006, he served three terms on the Guild’s national council, representing Region III.