The Relative Intensity of Organ Stops

The top organists and organ builders are keenly interested in the manner in which individual stops contribute to a combination. The relationship between the 8- and 4-foot principals on each division, for example, is central to defining an organ’s very nature. For the research behind this presentation, good-quality recordings were made from a central seat in the audience. Every stop on diverse organs from Germany, Boston, and Utah was recorded, and the same four bars of music played on common combinations. Many interesting details emerged from back-to-back comparisons of sound clips, and from line graphs of the intensity (volume) levels. 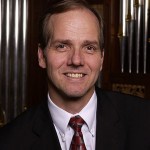 Don Cook joined the organ faculty of Brigham Young University in 1991. In that capacity, he serves as organ area coordinator and university carillonneur. Formerly, he held associate organist and choirmaster positions at Christ Church Cranbrook, Bloomfield Hills, Michigan, and at First United Methodist Church, Lubbock, Texas. After earning Bachelor and Master of Music degrees in organ at Brigham Young University, he received a Doctor of Musical Arts in organ performance from the University of Kansas. He currently directs the annual BYU Organ Workshop, founded in 2002, and appears frequently as a guest organist at the Mormon Tabernacle in Salt Lake City. He is actively developing innovative approaches to organ instruction, including the first multimedia organ tutorial for pianists, OrganTutor Organ 101; private and group instruction, BYU independent study courses, and teachers and students in at least nine countries use the tutorial.