Over the last decade, organists in many denominations have felt a greater need for music with a patriotic theme. Whether searching for repertoire for recitals or for voluntaries for worship on Martin Luther King, Jr. Day, Independence Day, Memorial Day, and other national occasions, or when responding to national tragedies, thoughtful organists hope to find music that is appropriate to the occasion while maintaining musical and theological integrity. Many contemporary composers have responded to this need, and publishers have made resources available. Compositions from the past have also been discovered and newly published. 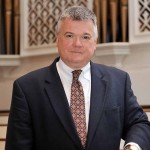 Wayne L. Wold, DMA, AAGO, is associate professor, college organist, and chair of the Music Department at Hood College in Frederick, Maryland, and music director/organist at First Lutheran Church of Ellicott City, Maryland. From 1996 through 2013, he was director of chapel music at Camp David. Active as an improviser and recitalist, he has presented numerous hymn festivals and concerts, and as a harpsichordist he has performed with numerous chamber music ensembles and with the Maryland Symphony Orchestra. A prolific composer and author, he has more than three hundred published compositions to his credit, including organ works, anthems, hymns, journal articles, reviews, and three books. A long-time member of the American Guild of Organists, he has held offices in the Cumberland Valley, Baltimore, and Central Maryland chapters; has composed commissioned works for two regional conventions; and currently serves on the Guild’s Committee for Musicians in Part-Time Employment.