Empower your congregation to enjoy singing with comprehension of the music. Topics for discussion and demonstration include: the BIG beat and breathing; leading the congregation, our largest choir, in song; hymn life beyond accuracy; painting the text; and giving the hymn the treatment—a demonstration of ways to enliven the hymn through improvised hymn introductions, free hymn accompaniments, and other easy improvisational ideas. 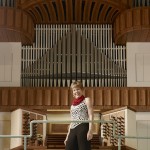 Faythe Freese, D.Mus., professor of organ at the University of Alabama, has performed throughout the United States, Germany, Denmark, South Korea, and Singapore. She is the first American woman to have recorded at L’Église de la Sainte-Trinité, Paris on the landmark instrument where Guilmant, Messiaen, and Hakim were titular organists. She was a lecturer and recitalist at the 2010 national convention of the American Guild of Organists in Washington, D.C., various regional Guild conventions, and many Pipe Organ Encounters. Her performances have been hailed as “powerful…masterful…impressive…brilliant.” As a Fulbright scholar, she studied the works of Jean Langlais with the composer in France, and the works of Max Reger with Heinz Wunderlich in Germany. She studied with Marilyn Keiser, Robert Rayfield, William Eifrig, and Phillip Gehring, and coached with Dame Gillian Weir, Simon Preston, and Daniel Roth.