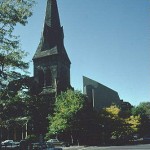 Established in 1630 by the founders of the Massachusetts Bay Colony, and expanding to Second Church in 1649, this was the church of the Mather family, John Winthrop, Paul Revere, and Ralph Waldo Emerson. The two congregations merged in 1970, commissioning Paul Rudolph’s Brutalist building of striated concrete in 1972 after fire destroyed most of an 1867 building by Ware and Van Brunt, architects of Harvard’s Memorial Hall. Outside, a vast copper roof cajoles unity from building elements old and new. A liturgical Cabinet of Dr. Caligari awaits inside, skylights illuminating dramatic angles of every description except right. In 2012, the congregation gave up on Rudolph’s deep outdoor amphitheater—even dead leaves seemed uncomfortable in it—entombing it under a welcome patch of sod. Former organists at First Church include composers Whitney Eugene Thayer and Arthur Foote, and the Chicago-born William E. Zeuch, who joined the Skinner Organ Company in 1917 and worked there until 1955.

Modern Movement in appearance and tone, the 1972 Casavant comes from that firm’s second decade of twentieth-century tracker organ construction. Though now under the leadership of Gerhard Brunzema, the stoplist follows a style established in the 1960s by Lawrence Phelps, while the case design recalls the asymmetrical, multi-front style popularized by Frobenius, as seen at First Church, Cambridge. 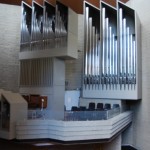