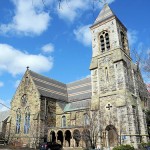 The location of Harvard University was partially determined by the desire for proximity to the original First Church in Cambridge, its congregation gathered in 1636. The Massachusetts Constitution, the world’s oldest in continuous use, was drafted in the fourth meeting house in 1779. Tensions between liberals and conservatives resulted in a split between Unitarian and Congregationalist factions by 1830. The sixth and present red granite structure, by Abel Martin, was dedicated in 1872. Gaze atop the steeple for a glimpse of a gilded rooster weather vane carried from church to church since 1721.

When Frobenius installed a twelve-stop organ at Queens College, Oxford in 1962, its elegant case, spare voicing, and obvious craftsmanship inspired a generation of English builders—much as the 1958 Flentrop at the Busch-Reisinger Museum did for New England builders. When the Cambridge Frobenius arrived in 1972, its place in the continuum made it more of a follower than setter of trends. Its logic and polish were immediately evident, however. The multi-flatted case, like sails on a schooner, was by now then Frobenius trademark; the organ itself is meticulously engineered, with pipes planted on the windchests exactly as they appear in the façade. Frobenius returned in 1995 to furnish new stop and combination actions. 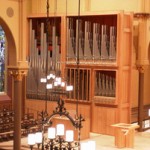