Fashioned in the Sound of our Peculiar God: Queer Theology and its Implications for Music and Liturgical Musical Practice

Building on extant feminist deconstructions of musical subjectivity, this paper examines feminism’s progeny, queer theory, and its implications for music and musical theologizing, with specific implications for liturgical musical practice. Questions to be considered include: How can historical modes of expression and newly unfolding explorations in music coexist? What can the past offer us when examined through a new lens? How do cultural attitudes about harmonic resolution and dissonance support or subvert liturgical objectives? 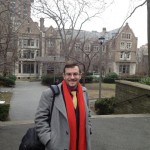 Sean R. Glenn holds degrees from the Boston University School of Theology (M.T.S., 2013); Queens College, CUNY (M.A. Music, 2011); and Cornish College of the Arts (B.M., 2009). He has had an extensive career as a liturgical musician, having spent time as a chorister as Saint Mark’s Episcopal Cathedral, Seattle; The Cathedral of Saint John the Divine, New York City; Boston University Marsh Chapel; and The Church of Saint John the Evangelist, Boston; and has also served as director of music for the Boston University Episcopal Chaplaincy and assistant organist at the Church of Saint John the Evangelist, Boston. His work has been musical and scholastic, yet always with an eye on implications for ministry. He is an active composer and singer, writing music primarily for use within liturgical settings. Academically, his work focuses on theologies of music through the lens of queer experience and Anglican identity.