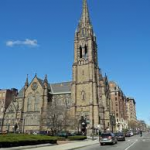 “We have one steeple in Boston that to my eyes seems absolutely perfect,” wrote Oliver Wendell Holmes of Church of the Covenant’s spire. Built between 1865 and 1867 as Central Congregational Church by architect Richard M. Upjohn (son of the Upjohn of Trinity Wall Street fame), the church merged with First Presbyterian Church in 1931. Louis Comfort Tiffany carried out an extensive remodeling of the sanctuary in 1894, incorporating an immense lantern exhibited at Chicago’s Columbian Exposition of 1893, its seven angels of the Apocalypse clasping orbs illuminated by the new technology of electricity. Forty-two windows demonstrate Tiffany’s mastery of the painterly effects made possible by opalescent glass. Islamic-inspired mosaics and motifs add to the overall impression of gloomy splendor.

Welte pipe organs are a rare species, the name being more associated with self-playing pianos and orchestrions. American-built Welte organs come from the short period 1925 to 1931, manufactured by firms unaffiliated with the original German firm. Boston’s Welte is distinguished by the involvement of Richard Whitelegg, a Willis-trained voicer who emigrated in 1925 and was associated with M.P. Möller from 1931 until his death, in 1944. Placed in two widely separated chambers, Great and Choir are on the right, Swell and Solo on the left, with Pedal voices in each chamber. Charles Courboin, organist at Wanamaker’s in Philadelphia and tonal adviser to Welte, dedicated this instrument in 1929.

The organ underwent various tonal changes typical of the 1960s, coming to fresh notice in the 1970s, when Nelson Barden linked up a Welte player to recreate historic roll performances. In 2000, Austin Organs, Inc. rebuilt the organ with Spencer Organ Company as principal subcontractor. While not a restoration, the project was undertaken in a sympathetic manner that preserved all existing Welte material, including Boston’s only diaphone. 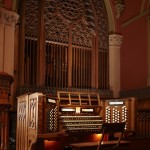