Bach’s Leipzig Chorales: New Thoughts on Their Development and Function

The Leipzig Chorales are an anomaly among Bach’s keyboard works, because a clear and exact purpose for this collection is unknown. This paper contextualizes the possible function of the chorales in the service at St. Thomas Church in order to find their liturgical use. It looks at their most plausible function, as chorale settings played in alternation with congregational singing of chorales during communion, specifically on feast days. It also explores their compositional development in light of other musical publications at the time, namely Georg Friedrich Kauffmann’s Harmonische Seelenlust, and pietistic theological writings appearing in Leipzig. 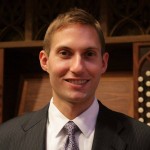 Daniel Aune is director of music and organist at Christ Lutheran Church, Baltimore. He holds a Doctor of Musical Arts in organ performance from the Eastman School of Music, where he studied with David
Higgs. Other degrees from Eastman include a Master of Music in organ with David Higgs, a Master of Music in harpsichord with William Porter, and the Sacred Music Diploma. Additional studies included improvisation with William Porter and a doctoral minor in composition. He has been published in the Eastman Organbook, and has also composed choral anthems and hymn arrangements for organ, brass, and choir. His competition
credits include first prize in both the Rodland Memorial Scholarship Competition and the San Marino Competition, second place in the Arthur Poister Competition, and semi-finalist in the National Young Artists Competition in Organ Performance. He also was the recipient of Eastman’s first-ever Lecture-Recital Prize.