One of the greatest Parisian organist-composers of the Belle Époque, Alexandre Guilmant exercised considerable influence as a musician. This presentation includes a wealth of photos, documents, and anecdotes about Guilmant, in particular about his three concert tours to the United States, and an overview of Guilmant’s life and work as organist at La Trinité in Paris, a much sought-after teacher of Europeans and Americans, co-founder of the Schola Cantorum, Professor of Organ at the Paris Conservatoire, and President of New York’s Guilmant Organ School. 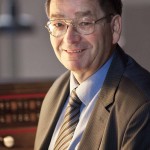 Hans U. Hielscher has been organist at the Marktkirche in Wiesbaden, Germany, since 1979. He studied at the Detmold State Academy of Music and in Paris/Rouen, France. His organ concert tours have taken him to all European countries, the United States (fifty-two tours), the Bahamas, Israel, Iceland, South Africa, Australia, New Zealand, Hong Kong, Singapore, and Bangkok. He has been featured on radio and television broadcasts, twenty-two CD recordings on the Motette, Wergo, IFO, and Lade labels, and is the author of the books Alexandre Guilmant: Life and Work, Famous Organs in the U.S.A., and The Organ of Wiesbaden Marktkirche. He is a published composer of some fifty works for organ. He has been honoured by the French government in Paris for his worldwide engagement in French organ music and nominated Chevalier de l’Ordre des Arts et des Lettres in 1985.