Future regional convention coordinators will meet with Mark Babcock to discuss process and procedures for hosting an AGO Regional Convention. 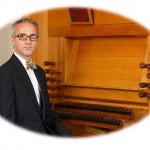 Mark A. Babcock received a bachelor’s degree in music education from Central College in Pella, Iowa, and a master’s degree in choral conducting and organ performance from Westminster Choir College in Princeton. He also pursued doctoral studies in choral conducting and organ at the University of Iowa. He has worked with great musical leaders such as Joseph Flummerfelt, Joan Lippincott, Robert Shaw, and Riccardo Mutti. He is the M. Joan Farver Endowed Professor of Music, chair of the Music Department, and director of choral activities at Central College, where his duties include private organ instruction; coursework in church music, music education, and music theory; and choral conducting. He is organist/choirmaster at St. Mark Lutheran Church in West Des Moines and the American Guild of Organists national councillor for conventions. He has also served the Guild as dean of the Central Iowa chapter and chair of the 2011 Region VI convention.