The Organ Music of Guenther Schuller

One of America’s greatest living composers, Boston-based Guenther Schuller (b.1925) has made substantial, yet little-known contributions to the solo organ and choral repertoires (some of it is associated with previous AGO conventions). This workshop introduces his dynamic music, influenced by both the Second Viennese School and jazz, through audio and score-analysis examples, placing it in the larger context of his work and twentieth-century American music. 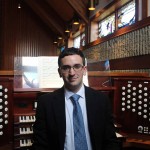 Aaron Sunstein is currently pursuing his Doctor of Music degree in organ at Indiana University, where he studies with Christopher Young. As associate instructor for the organ department, he teaches organ lessons and organ literature. He also serves as organist of St. Thomas Lutheran Church, Bloomington. His previous teachers have been Gary Verkade, Delbert Disselhorst, and Michael Kleinschmidt. He has been a prizewinner at the Rodland Competition and the Twin Cities AGO/Schubert Club Competition. Engaged in all periods of organ repertoire, he is involved in a long-term project performing, writing about, and recording Gunther Schuller’s organ music.