Wie schön leuchtet der Morgenstern, BWV 739, is likely Bach’s earliest work to survive in autograph. However, the authenticity of this piece has long been disputed on the basis of musical style. In 1985, Russell Stinson defended the attribution of the source manuscript, and proposed 1705 as a probable date of origin. Recently discovered sources, such as the chorale preludes of the Neumeister collection, provide a new context for analysis of BWV 739, and suggest that the piece is an authentic Bach composition dating from the late 1690s. 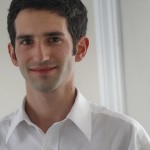 Tom Mueller is a doctoral student at the Eastman School of Music, where he studies organ with David Higgs. He is also a composer, and his choral and instrumental works have been performed, recorded, and broadcast across the United States. In 2010, he performed the complete organ works of J.S. Bach in a series of seventeen concerts across the state of Maine. He is also an accomplished guitarist, and previously served as the bandleader of The Muellers, a nationally recognized family bluegrass band, and spent several years touring North America. Their fourth album, The Muellers, was released in 2009, and includes many of his original songs and arrangements. He holds degrees from the University of Maine (jazz composition/piano) and the University of Notre Dame (organ). He currently serves as assistant organist at Third Presbyterian Church in Rochester.