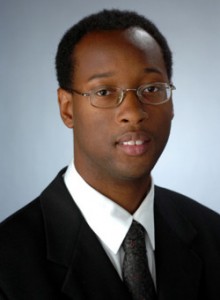 A native of Toronto, Canada, Kola Owolabi is university organist and assistant professor of music at Syracuse University. There, he teaches courses in organ, improvisation, continuo playing, and baroque chamber music; plays for weekly chapel services and special events; and coordinates the Malmgren Concert Series at Hendricks Chapel. He is the current dean of the Syracuse chapter of the American Guild of Organists. He holds degrees from McGill University, Montréal, (B.Mus, organ performance), Yale University (M.M. organ performance and choral conducting) and the Eastman School of Music (DMA, organ performance). His teachers have included Bruce Wheatcroft, John Grew, Martin Jean, Thomas Murray, Hans Davidsson, and William Porter. In 2002, he was awarded second prize and audience prize at the American Guild of Organists National Young Artists Competition in Organ Performance. He is a published composer and has received commissions from the Royal Canadian College of Organists and the Catholic Archdiocese of Toronto. His solo organ composition Dance was selected for the Royal Canadian College of Organists National Competition in August 2013, for all finalists to perform. As a solo recitalist, he has performed across Canada, the United States, Mexico, and Jamaica, at venues such as St. Thomas Church Fifth Avenue in New York, Methuen Memorial Music Hall in Massachusetts, Cornell University, and the University of the West Indies in Jamaica. He also performs regularly as organist and harpsichordist with the Grammy-nominated vocal ensemble Seraphic Fire and Firebird Chamber Orchestra, based in Miami.