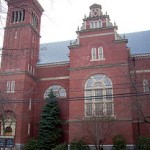 Few organs thrown out of their original locations have landed as gracefully as Methuen’s. Installed in 1863 on the stage of the original Boston Music Hall, Walcker’s four-manual instrument was a showcase of novelty: pneumatic action, sliderless cone-valve windchests, two swell enclosures (including part of the Pedal), a plethora of curiously made flutes and free reeds, a crescendo device, and what would prove the first thirty-two-foot reed (free, not beating) heard on these shores. But as soon as 1881, the newly founded Boston Symphony Orchestra began jostling for space around the organ’s muscled herms, winning the turf battle in 1884. The instrument, which had cost $60,000, was sold for $5,000, removed to storage, and sold again for $1,500 to its savior, Edward Francis Searles.

To house the organ, Searles commissioned an Anglo-Dutch-style hall from Henry Vaughan, English-born architect of the National Cathedral. This great room served as Searles’ music salon from 1909 until his death, in 1920. From thence the property passed through the hands of Ernest M. Skinner, whose workshop it was until his bankruptcy, to a civic organization that has operated it as a cultural center since 1946.

At Methuen, the Treat Organ Company put the pipes on new slider chests and provided a terrace-jamb console, preserving Walcker’s original in-built keydesk with its colored porcelain indicators. During Skinner’s ownership of the hall and organ, a few tonal changes were made, but nothing so drastic as the renovation undertaken by Aeolian-Skinner in 1947. The mechanism was sped up, the console modernized, and almost half the pipes replaced to conform to the firm’s house style. In its first decade, the Andover Organ Institute, guided by Arthur Howes, brought the instrument to public notice and played an important role in shaping post-war organ reform thinking. Andover Organ Company, the organ’s curators for decades, installed a Great reed chorus in 1971; more recently they have again updated the console, moved Aeolian-Skinner’s spiky Krummhorn from Choir to Positiv, and installed a smoother clarinet in its place. Regular summer Wednesday recitals are supplemented by special events throughout the year. 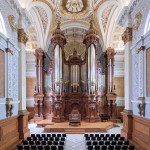