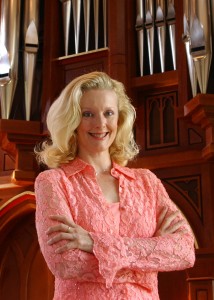 A student of Wilma Jensen, Clyde Holloway (Indiana University), Wolfgang Rübsam, and Richard Enright (Northwestern University), Janette Fishell is a recitalist and teacher of international standing. She has performed in many of the world’s greatest concert venues and is a leading authority on the organ music of Petr Eben. Her critically acclaimed recordings include performances as soloist, accompanist, and choral conductor, and in duet with her husband, Colin Andrews. Since 2008, she has been professor of music and chair of the organ department at the Jacobs School of Music, Indiana University, where her students have distinguished themselves in the fields of performance, sacred music, and research.

Dr. Fishell has been featured in live broadcasts for the BBC, NHK (Tokyo), and Czech Radio. A frequent adjudicator, she has been a judge for the recorded rounds of the American Guild of Organists’ NYACOP, the Canadian International Organ Competition (CIOC), and the inaugural Longwood Gardens International Organ Competition. She will return to the CIOC as member of its 2014 international jury. She has also served on the Guild’s NYACOP and Professional Education committees. She frequently delivers masterclasses in organ performance and sacred music, with special emphasis on the connection between technique and musical interpretation.

In December 2013, Dr. Fishell completed her twenty-one-concert project, “The Seasons of Sebastian,” in which she performed the complete organ works of J.S. Bach for the first time at Indiana University. She is represented by Karen McFarlane Artists in North America and records for the NAXOS and Priory labels.