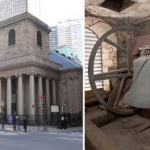 King’s Chapel opened in 1689 as the first Anglican church in Boston, Peter Harrison’s larger granite building replacing the original wooden structure by 1754. The planned steeple remains a good intention. Firmly loyalist at the American Revolution, defections steadily reduced attendance until March 10, 1776, when Reverend Henry Caner packed up the church silver and headed for Halifax. James Freeman, lay reader at the re-opened church by 1782, embraced Unitarianism with a fervor that prompted the Episcopal bishop to refuse his ordination. Undaunted, pew owners ordained Freeman themselves, establishing the first Unitarian church in America. Prominent King’s Chapel musicians have included William Billings, William Selby, Virgil Thomson, and Daniel Pinkham. A bell cast by Paul Revere still peals out on Sunday mornings. Those accustomed to contemporary patterns of Unitarian-Universalist worship might not recognize the Sunday morning goings-on here, conforming as they do more to Anglican patterns.

The organs of King’s Chapel read like a nutshell history of American organ-building. The first instrument, the famous English-built “Brattle” organ, ended up at King’s after its first parish rejected the instrument on theological grounds. With the new building came a second instrument, in 1756, from London builder Richard Bridge. A century later, in 1860, it was time for a third organ, this time by Simmons & Willcox, who reused much Bridge material. John Henry Willcox favored innovation, best seen here in placing the sixteen-foot chorus reed in the Swell rather than the Great. The fourth organ, from Hook & Hastings in 1884, was a straightforward affair resembling dozens of its contemporaries.

Ernest Skinner’s 1909 instrument swept aside the old, introducing electric action, duplexing, thumb pistons, and orchestral pretensions, all clothed in an elegant Georgian Revival case-front. Aeolian-Skinner made revisions in 1946, a foretaste of the building’s sixth instrument, installed by Charles Fisk in 1963. The first three-manual tracker built in the United States in the twentieth century, it re-used several old ranks and Fisk designed a case that dared to look old but not slavishly so. Undaunted by the absence of any acoustical ambience, Fisk returned later to switch around a few stops and install reeds made in his own shop. 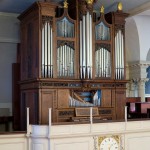