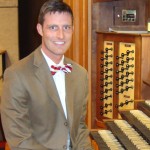 Patrick A. Scott is Music Associate and Organist at Myers Park United Methodist Church, a 5,000-member church located in the heart of Charlotte, North Carolina.  A native of Picayune, Mississippi, he holds the Bachelor of Music degree in Organ Performance from Birmingham-Southern College where he studied with Dr. James Cook.  As a student of Drs. Judith and Gerre Hancock, Patrick earned the Master of Music in Organ Performance and Sacred Music and the Doctor of Musical Arts in Organ Performance, both from The University of Texas at Austin.  His other major teachers have included Betty Polk and Kathy Vail.

Dr. Scott was awarded the audience prize as well as the second prize in the American Guild of Organists 2012 National Competition in Organ Improvisation.  He has also been the winner of many first prizes in regional and national competitions throughout the region.  An active recitalist and accompanist, Dr. Scott has appeared in concert throughout the United States, as well as in France, Prague, Austria, Scotland, England and Ireland.  Dr. Scott will also be teaching improvisation for the 2015 American Guild of Organists Region IV Convention.