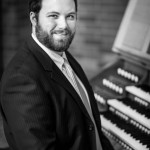 Christopher Ganza began studying the organ at the age of nine with Ray Cornils, Municipal
Organist of Portland, ME. He was soon appointed organist at Corpus Christi Parish, and at the Universalist-­?Unitarian Church of Waterville, ME. He received the degree of Bachelor of Music in Church Music from St. Olaf College in Northfield, MN, studying organ performance and improvisation with John Ferguson and Catherine Rodland. He was the first organ scholar at the Church of St. Louis, King of France, under the supervision of Brian Carson. Christopher received the Master of Music degree from the University of Oklahoma, studying with John Schwandt. He is currently working towards a Doctor of Musical Arts Degree at the University of Oklahoma, studying organ performance and improvisation with John Schwandt, and choral conducting with Richard Zielinski.