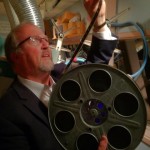 Peter Edwin Krasinski currently serves as organist of First Church of Christ, Scientist in Providence and as accompanist at Beth El Temple Center, Belmont, Massachusetts. He is on the faculty of the Boston Archdiocesan Choir School, Cambridge and serves as organ consultant on a number of high-profile projects. He holds both a Bachelor of Music in music education and organ performance and a Master of Sacred Music from Boston University. A winner of the first prize in improvisation in the American Guild of Organists National Competition, he has played in concert at many of the world’s most important organ venues. He has premiered the art of silent film accompaniment at many distinguished venues, including Saint Paul Church, Cambridge; National City Christian Church, Washington, D.C.; Cathedral of St. Joseph, Hartford; Saint Joseph’s Oratory, Montreal; Second Congregational Church, Holyoke; and major halls in Yokohama, Fukui, Miyazaki, and Kanazawa, Japan.