Robert Sirota’s Appartitions for string quartet and organ is in four movements based on American Hymn tunes.  The movements are:  1.  My Shepherd will supply my need, 2.  Jesus calls us, 3.Come, thou fount of every blessing and 4.  What wondrous love is this?

“American hymnody has played a significant role in my organ writing for some time. The last organ piece I wrote was for the historic Appleton organ, an 1830 instrument housed in the Metropolitan Museum of Art. It’s a rather ghostly instrument, so I imagined that three early American hymns (Helmsley, Semley, and From Greenland’s Icy Mountains) had been played on the Appleton so many times that the organ was able to play them by itself, and I went from there. The title of that piece is holy ghosts. I was still turning that idea over out in my mind when I learned that the 2014 AGO commission would be performed in King’s Chapel, practically the epicenter of 18th and 19th century New England hymnody.

Apparitions emerged as paraphrases on four tunes – not so much variations as jumping-off points for something more flexible and fantastic. I have employed two Southern Harmony tunes: Jesus Calls Us (Restoration) and Wondrous Love, and two Northern tunes: My Shepherd Will Supply My Need (Resignation) and Come Thou Fount of Every Blessing (Nettleton), and am in awe of the spiritual and emotional range of these great melodies: the stark simplicity of Resignation, the primal power of Restoration, the passionate joy of Nettleon, and particularly the fierce piety of Wondrous Love.” (From Robert Sirota’s program notes)  Robert Sirota’s music is available through Muzzy Ridge Music. 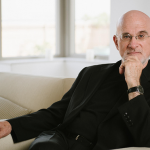 Over the last four decades as a composer, Robert Sirota has developed a distinctive voice, clearly discernable in all of his work – whether symphonic, choral, stage, or chamber music. The New York Times has described his styles as, “fashioned with the clean, angular melodies, tart harmonies, lively syncopations and punchy accents of American Neo-Classicism,” and writes, “Thick, astringent chromatic harmonies come in tightly bound chords to create nervous sonorities. Yet the textures are always lucid; details come through.”

A native New Yorker, Sirota’s earliest compositional training began at the Juilliard School; he received his bachelor’s degree in piano and composition from the Oberlin Conservatory, where he studied with Joseph Wood and Richard Hoffman. A Thomas J. Watson Fellowship allowed him to study and concertize in Paris, where his principal teacher was Nadia Boulanger. Returning to America, Sirota earned a Ph.D. from Harvard University, studying with Earl Kim and Leon Kirchner.