“Eternal Ruler of the Ceaseless Round”  – SATB chorus and Organ

Libby Larsen is the 2014 AGO Distinguished Composer.  She has a catalog of over 400 works that can be seen at libbylarsen.com.

Eternal Ruler of the Ceaseless Round is a hymn and anthem in one composition, scored for congregation, SATB chorus and organ.  The organ part leads with triumphs and restless vitality while the hymn moves in a straightforward way reminiscent of the hymns sung at the birth of our nation.  The glorious organ introduction begins the piece in C Major after which the congregation sings the first stanza.  The organ then introduces the choir to sing the second stanza in the Lydian Mode (in E Flat).   The organ again leads the choir to sing the final stanza in C.  The text is by the New England theologian and hymnwriter John W. Chadwick in 1864.  Eternal Ruler of the Ceaseless Round is available from Oxford University Press. 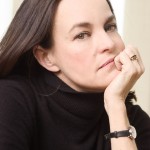 Libby Larsen’s catalogue spans virtually every genre, from intimate vocal and chamber music to massive orchestral works and more than fifteen operas. Her music has been praised for its dynamic, deeply inspired, and vigorous contemporary American spirit. She has been hailed as “the only English-speaking composer since Benjamin Britten who matches great verse with fine music so intelligently and expressively” (USA Today); as “a composer who has made the art of symphonic writing very much her own” (Gramophone); as “a mistress of orchestration” (Times Union); and for “assembling one of the most impressive bodies of music of our time” (Hartford Courant).

Ms. Larsen received a 1994 Grammy Award as producer of The Art of Arlene Augér, an acclaimed recording that features Larsen’s Sonnets from the Portuguese. USA Today named the premiere of her opera Frankenstein, The Modern Prometheus one of the eight best classical music events of 1990. She has held residencies with the California Institute of the Arts, the Arnold Schoenberg Institute, the Philadelphia School of the Arts, the University of Cincinnati College-Conservatory of Music, The Minnesota Orchestra, and the Charlotte and Colorado symphonies. Her works are widely recorded on such labels as Angel/EMI, Nonesuch, Decca, and Koch International. She held the Harissios Papamarkou Chair in Education at the Library of Congress in 2003–2004, and is the recipient of the Eugene McDermott Award in the Arts from the Massachusetts Institute of Technology and a Lifetime Achievement Award from the American Academy of Arts and Letters.