Who Framed Bach’s Toccata? A Study in the Sublime

The authorship of J.S. Bach’s Toccata and Fugue in D minor, BWV 565 has been in doubt for a generation. Learn about Jonathan Hall’s research on Cornelius Heinrich Dretzel, whom he hypothesizes is the true composer of this enduringly popular work. The presentation covers the stylistic parallels between BWV 565 and works definitely attributed to Dretzel, the influence of the musical sublime on this work, and the broader context of South German and neighboring organ culture. 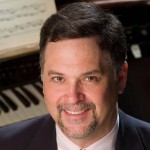 Jonathan B. Hall, FAGO, Ch.M., is a member of the American Guild of Organists Professional Certification Committee and teaches music theory at New York University. He is music director of Central Presbyterian Church in Montclair, New Jersey, and a frequent contributor to The American Organist and other publications. His book, Calvin Hampton: A Musician Without Borders, is available from Wayne Leupold Publications. He earned the Doctor of Music degree at the Jacobs School of Music of Indiana University, where he studied with Marilyn Keiser and Christopher Young. He also did graduate study at the University of Chicago, earning the Master of Arts in English literature. A New York City native, he lives in Rutherford, New Jersey, and is past dean of the Brooklyn chapter of the American Guild of Organists.