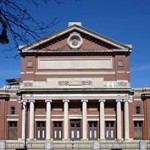 Harvard acoustician Wallace Sabine’s stroke of genius at Symphony Hall was to veto Charles McKim’s original design for a wide, semicircular amphitheater, opting instead to copy successful European halls. The triumphant result is a steel, brick, and plaster shoebox sixty-one feet high, seventy-five feet wide, and 125 feet long, whose neoclassical coffers and crannies distribute sound with uncanny richness. As at Vienna and Amsterdam, the orchestra sits in the room itself with minimal interference from proscenium or balconies. Up to 2,625 attend each concert during the Boston Symphony Orchestra season, reduced to 2,370 for summer and holiday Pops, when tables, chairs, and waiter service replace the orchestra seating. Listen for the original leather seat bottoms dropping noisily during quiet moments, just as they have since 1900. Bostonians have their hall and wouldn’t change a hair on its head, although the skimpy public areas (sacrificed to the acoustic shoebox concept) have been redecorated frequently with varying degrees of success. When the stage floor was replaced in 2006, the original hand-forged nails were carefully replicated.

Having recently completed the organ for the Mission Church, in 1897, and many other distinctive instruments along the Northeast Corridor, George S. Hutchings was at a peak when his firm built the three-manual organ for Symphony Hall in 1900. If this organ had a defining characteristic, it was surely the Pedal, containing not only an ample thirty-two-foot wood Diapason but also a Trombone on fifteen-inch pressure. Over the next fifty years, fashion bypassed Hutchings’ essentially conservative scheme. What proved insufficiently orchestral for the 1910s and ’20s became too heavy and Romantic for the ’30s and ’40s.

E. Power Biggs became the champion for a new Aeolian-Skinner of leaner aesthetic. It arrived in 1950 to mark three events: the Hall’s fiftieth anniversary, the bicentennial of the death of J.S. Bach (including a visit from Albert Schweitzer), and the 1950 American Guild of Organists National Convention. Hutchings’ thirty-two-foot diapason was chopped up and replaced with a slender thirty-two-foot Violone, along with a reedless Great, unenclosed Positiv, and capping Bombarde division. The organ gained fame perhaps less through recitals than through recordings, by Biggs, Pierre Cochereau, and Virgil Fox. The Foley-Baker, Inc. rebuild of 2004 sought to reframe the instrument in a world that had seen enormous changes in the sonic heft of concert-hall organs: the Fisk in Dallas, the Dobson in Philadelphia, the Glatter-Götz/Rosales in Los Angeles. Two additional thirty-two-foot registers, Diapason and Bourdon, were incorporated. The Positiv was eliminated, the Bombarde strengthened, and several foundation registers added as the Choir became a Solo. While the organ has yet to be heard in recital, it is used often in orchestral performances. 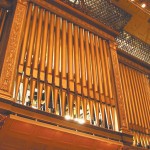