Richard Purvis (1913–1994), Alexander McCurdy’s star student and a classmate of Leonard Bernstein’s at Curtis, elevated American service playing, compositional style, registration, and interpretation as San Francisco’s celebrity organist-choirmaster for twenty-five years. His tempestuous tenure as “Master of Grace” became untenable under Bishop Pike, an equally stormy figure. But Purvis, who wrote his famous setting of Greensleeves while a prisoner of war in Germany, went on to fame, influence, and legend as a performer, teacher, and composer with a passion for programmatic music, a habit of high drama, and a lively disdain for organ orthodoxy. 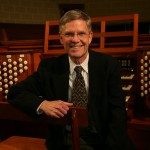 James Welch is university organist at Santa Clara University and organist at St. Mark’s Episcopal Church, Palo Alto. He received his Doctor of Musical Arts in organ performance from Stanford University, with further studies in France and Austria. His concert career includes performances at Notre-Dame Paris, the Leipzig Gewandhaus, the National Cathedral, and the Mormon Tabernacle. He has also performed and taught in Beijing, Taipei, Hong Kong, New Zealand, and Jerusalem. A specialist in Latin American organ music, he received a Fulbright to perform and conduct research in Brazil; he also concertized in Mexico and edited three volumes of organ music by Mexican composers. Author of a major new biography, Richard Purvis, Organist of Grace, he has performed at conventions of the American Guild of Organists and the International Congress of Organists, written extensively for The American Organist and The Diapason, and released numerous recordings on a variety of organs.