Know Your Instrument – A Little Better

What’s going on in there, anyway? Because of the size, complexity, and rather stationary nature of the pipe organ, among musicians of all stripes, organists are perhaps the least aware of what makes their instrument make music. This workshop briefly covers the history and structure of the pipe organ, the various key actions, and the instrument’s most common problems. It also addresses the pipes and tuning, the importance of environment, and general care of the organ. Finally, how to call your organ technician for routine care and for that dreaded emergency. 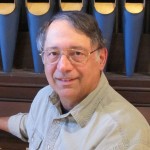 David E. Wallace apprenticed in pipe organ restoration with the Andover Organ Company of Lawrence, Massachusetts. He received his early musical training in piano and organ from Eleanor Wallace, John Fay, and Stewart Shuster. After completing college, a graduate degree, and a career as a language translator in two languages for the U.S. Air Force, he founded David E. Wallace & Company Pipe Organ Builders, a pipe organ service company in southern Maine. The company has grown and specializes primarily in the restoration and renovation of historic mechanical action instruments, as well as the construction of new mechanical action pipe organs. Mr. Wallace has authored numerous articles for organ journals and magazines on pipe organ restoration and on several specific instruments, including Portland’s historic Kotzschmar Memorial Organ.