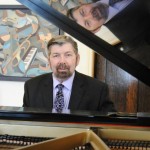 Bruce Wheatcroft, D.Min., has spent most of his working career in the service of the church as a conductor, organist, teacher, and administrator. He holds a D.Min. in theology from St. Stephen’s College, Edmonton, an M.Mus in musicology from the University of Alberta, a B.Mus. in organ performance from the University of Calgary, and the ARCCO diploma from The Royal Canadian College of Organists. He has lectured at undergraduate and graduate levels for the University of Alberta and has taught for the faculty of music at McGill University. He has frequently been heard as a recitalist and conductor for national CBC broadcasts and has performed at national conventions of The Royal Canadian College of Organists. He has held important church music posts in Montréal and Western Canada, is active as an adjudicator, and has developed a distinguished career as a teacher, workshop leader, and lecturer throughout North America.