During the compositionally fertile interwar period, the reclothing of ancient source material with contemporary compositional techniques emerged as a defining characteristic of modern French organ music. The new treatment of modes, rhythms, and forms derived from ancient sources such as plainchant, early modal compositions, and non-Western musics enabled a modern style that both renewed tradition and broke with Romanticism. The characteristics and complexities of this new synthesis of ancient and modern are illustrated with examples from the works and writings of Tournemire, Messiaen, and Alain. 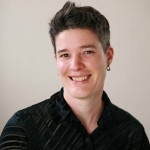 Ruth Draper’s scholarly focus is exoticism in late nineteenth- and early twentieth-century music, with a focus on the cultural ideologies and compositional mechanisms surrounding the shift away from the representational. Currently a DMA student at the University of Washington, she is writing her dissertation on the music of Jehan Alain. She holds master’s degrees in organ and music theory pedagogy from the Eastman School of Music, and completed her bachelor’s work at Oberlin College Conservatory of Music. Also successful as a performer, she is an international competition laureate and regular recitalist. She is currently organist at Seattle First Baptist Church and accompanist and theory teacher for the Seattle Girls’ Choir touring ensemble.