In recent years, pre-eighteenth-century Spanish organ music has emerged from relative obscurity, yet it remains unfamiliar to many organists. Most of this repertoire is easily played on smaller instruments (even without pedals), but some musicians feel intimidated and unsure about how to approach it. This paper introduces the three most significant Spanish organ composers of the time—Cabezón, Correa de Arauxo, and Cabanilles—and focuses on the predominant genre: the tiento. Also included are handouts listing current playing editions and a short bibliography on aspects of performance practice. 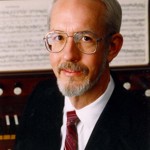 Robert Parkins is university organist and professor of the practice of music at Duke University. His publications include articles for several professional journals, including essays on performance practices in early Spanish keyboard music and the chapter on “Spain and Portugal” in Keyboard Music Before 1700 (Routledge). Among his recordings, on various labels, are Early Iberian Organ Music (Naxos) and Iberian and South German Organ Music (Calcante). Early Spanish Keyboard Music, a harpsichord LP first issued by the Musical Heritage Society in 1983, is now available again as a free MP3 download at https://sites.duke.edu/robertparkins/early-spanish-keyboard-music/. He received his degrees from the University of Cincinnati College-Conservatory of Music and the Yale University School of Music. In 1973, he was awarded a Fulbright grant to study in Vienna. His teachers have included Gerre Hancock, Anton Heiller, Ralph Kirkpatrick, Charles Krigbaum, and Michael Schneider.