A Golden Age: The Music of the Boston Classicists

In the early 1900s, Boston was the home of many of the most prominent American composers, including Amy Beach, Arthur Foote, Horatio Parker, and others. Their organ and choral music was widely performed, and Foote later remembered their time as a golden age, when music was perceived as an uplifting intellectual, moral, and spiritual force, and Boston was known as “the Athens of America”. This workshop introduces the organ and choral works of these composers, set against the cultural milieu of the era. 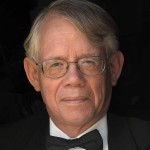 Organist and composer Harold Stover has written on American organ music and organs for The American Organist, The Diapason, The Tracker, and other journals, and has recorded American organ music for Albany and Table Eight records. He is a native of Latrobe, Pennsylvania; a graduate of The Julliard School; and a resident of Hollis Center, Maine.