The Basilica  and Shrine of Our Lady of Perpetual Help (Mission Church)
1545 Tremont St., Roxbury MA 02120

The Basilica of Our Lady of Perpetual Help/Mission Church

Properly known as the Basilica and Shrine of Our Lady of Perpetual Help, Mission Church was erected between 1876 and 1878 of locally quarried Roxbury puddingstone and Quincy granite, its 215-foot towers not completed until 1910. Long associated with the Redemptorist Fathers’ missions to the disenfranchised, Mission Church is one of fifty-four minor basilicas in the U.S., entitled to its own coat of arms and a papal umbrellina, kept half-open to signify the Basilica’s readiness to host His Holiness at any moment.

In the 1890s, no Boston builder was more progressive or interesting than George Hutchings, particularly as supported by Ernest Skinner, Hutchings’ factory superintendent from 1890 to 1901. While the firm had already built notice-gaining instruments for New York and Connecticut, Opus 410 for Mission Church was an opportunity to display all the latest advances (electric-action, “bat-wing” console, combination action, pitman windchests) right at home and in a peerless acoustic. Tonally, the organ was partially retrospective, with a three-mixtured Great (III, V, and VII) paying obvious homage to the same complement of upperwork on the 1863 Hook at nearby Church of the Immaculate Conception. Alexandre Guilmant played the Mission Church organ shortly after its installation.

However, this late statement of classically oriented romanticism was still not classical enough to escape the tidal wave of 1960s tonal reform. Advised by Charles Fisk, the Lahaise brothers renovated the organ in 1968 with new slider windchests and lowered wind pressures. The organ condensed into a three-manual in the process, removing much of the unison work. The blazing Great, with its intense reed-and-mixture battery, still gives some hint of the original and, over the last fifteen years, certain unison registers and a prominent Tuba stop have been reinstated. 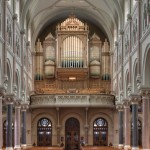 Basilica of Our Lady of Perpetual Help Organ Specifications